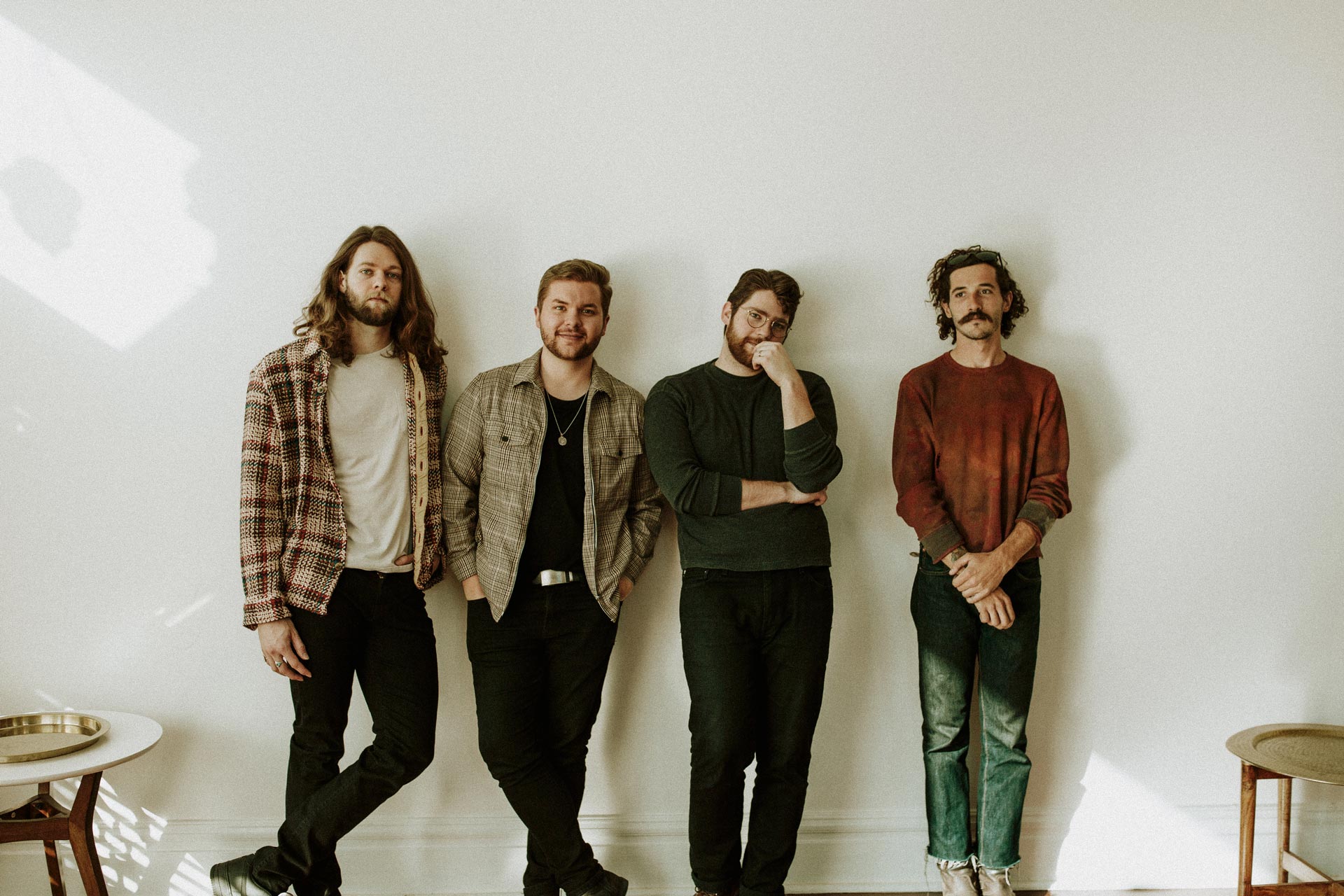 From sibling connections and childhood friendships to boy band grooming and road-weary touring.  From classic rock influences and innovative sonic tech to internet contest winner and a recording contract.  The story of Hounds, and the St. Louis-based quartet’s major label debut, Cattle in the Sky, just may be the epitome of rock-and-roll success in the 21st century.

As youths, Jordan Slone and his younger brother, Logan, were equally precocious musicians.  Essentially self-taught- Jordan, singer and guitarist; bassist Logan- while in high school the two assembled their first working group, recruiting longtime friend and drummer Logan Mohler to form Clockwork in 2010.  Within two years, they were touring clubs and making festival appearances throughout a 30-state region, supporting notable artists such as Blues Traveler, Andy Grammer, and O.A.R., peaking at 100 performances a year.

“The big, underlying theme- from what we had experienced (as Clockwork)- was that we no longer wanted to do something just because it seemed like a good business move,” says Jordan.

Instead, they pivoted to a more aggressive brand of rock laced with rich and resounding harmonies, returning to and embracing old-school influences, The Beatles, The Doors, and The Beach Boys.  They changed their name to Hounds- a wink to alt-rockers, The Districts- and by 2017, released a self-titled LP of tracks cut live in the studio.  In 2019, Jordan suggested the three audition for the second season of the nationwide band competition, Who Will Rock You?, a web-series sponsored by TopGolf venues.

Hounds survived early-round hurdles, (including Jordan’s dislocated knee), to emerge as Who Will Rock You? champions, scoring an artist development deal with major label BMG.  Impressed with the band’s back catalog of self-written songs, the imprint extended the offer to include an album.  In September of 2019, the group entered Sawhorse Studios in St. Louis with engineer Jason McEntire to begin work on the debut, but not before one more change.

Refreshed and with a renewed commitment, Logan asked to return to the band.  He was welcomed back, this time as the ensemble’s keyboardist.  Completing the current lineup as a quartet, he brought not only another color and dimension to Hounds’ sound, but an additional voice and songwriting capability, as well.

Built on vibrant, ringing harmonies and concentrated, muscular riffs, the four crafted a forward-moving, immediate, and pulsing collection of songs ranging from greasy rumble-seat rock to up-to-the-minute, angst ridden modern musings.  Start with “Shake Me Up” and follow the quartet down the dragstrip lined with poodle-skirt Bettys and their denim-clad boyfriends; a veritable mash-up of jukebox soul and reformist rock.  “We’re a rock-and-roll band, and we’re never afraid of the technology of today,” says Jordan.  “We follow wherever the inspiration takes us.”

Lyrically, the dozen tunes mostly dig through the trials and tribulations of love; piercing reveries crafted by Jordan and his bandmates.  Only two tracks recorded for the set were co-writes: “Three Hits of Acid,” a suitably synthy, glistening and lysergic anthem, authored with noteworthy L.A. tunesmith Ted Bruner; the warp-speed rocker, “Make You My Baby,” penned with Nashville’s Justin Flagg. Even the album’s title- whose secrecy-sworn connotation continues to morph- draws its origin from a ubiquitous contemporary source.

“It’s all been a consistent learning curve for us,” Jordan says.  “We’re so grateful that we are trusted us enough to write and produce our music.“